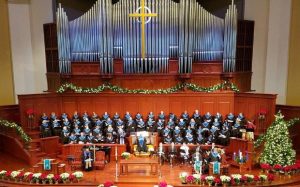 The congregation of Johns Creek United Methodist Church decided that it was time to build a dedicated worship space. It was always accepted as fact that this space, the sanctuary, would be furnished with the finest pipe organ obtainable. An organ committee was formed and began the process of selecting an organ builder. Trips were made to hear organs in Johns Creek, Alpharetta, Roswell, Greenville, South Carolina, and St. Paul, Minnesota. A builder was selected and a design formulated. However the funding of an organ project was not slated for the initial phase of building due to the cost.

It has long been known that rebuilding and installing a used pipe organ was less expensive than having a new one built. Trinity Church, Wall Street, NYC had a very large pipe organ in storage. The church had removed the pipe organ from its sanctuary after the attacks on the World Trade Center. It was thought that dust from the collapse of the towers (just blocks from Trinity Church) had irreparably damaged the organ. However, this was not true. The organ was in need of cleaning and some rebuild work would be necessary, but it could be saved and reused. Trinity was not interested in using it any longer and was persuaded by John Bishop of the Organ Clearing House to donate the organ to Johns Creek United Methodist Church.

The organ was removed from Trinity Church’s storage space, inventoried and catalogued. The cost for this phase of the project was approximately $90,000. During this process, it was determined that it would cost in excess of $1 million to restore and reinstall the organ. However, the cost to build a new pipe organ of the same quality and size would be over $4 million. The savings to the church would be significant. This work of restoration and reinstallation was painstakingly and professionally accomplished by the firm of Casavant Freres of St. Hyacinthe, Quebec. The opportunity to salvage a victim of the horrific attacks on the World Trade Center and use it in praise to God is unique. What a tremendous tribute to those who lost their lives as a result of the events on that horrible day. It is Johns Creek United Methodist Church’s distinct honor and privilege to lovingly restore and reuse this magnificent instrument of praise.

The organ restoration is now complete and the organ installation began in August 2016. Following the installation was a two month process of voicing the instrument to its new home, completed on November 18. The organ was played again in worship for the first time in 15 years on the morning of November 20, followed by a formal re-dedication on December 4. On the occasion of that re-dedication, we were honored to be featured by National Public Radio on its program All Things Considered.

For the most current information about the project progress, follow the Johns Creek UMC Music Facebook page.