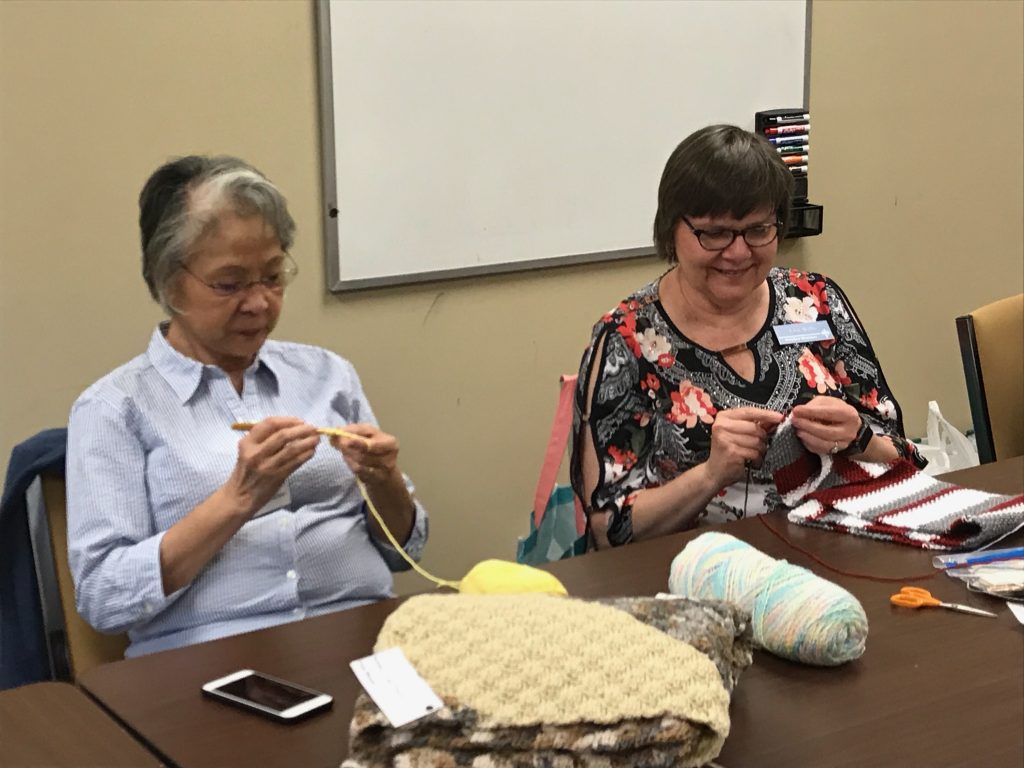 We’ve all seen the lovely prayer shawls draped across the altar railing during worship, when the children lay their hands on them and they are blessed.  Some of us have received one at a time when we have needed extra prayers and comfort.   Others have presented one to another person who could use an extra hug.  But have you ever wondered who’s behind these prayer shawls?  How long have we had this ministry?  What is involved in creating a prayer shawl?  Can anyone take part in it?

I recently visited a gathering of this group to see what it was all about.  When I entered Room 201 that Wednesday afternoon in March, there were twelve women sitting around the tables.  Skeins of yarn and some pattern books lay in front of several women.  Five completed shawls were stacked on one table.  A row of plastic bins filled with colored yarn lined one of the walls.

As I visited with these women during this hour, I got a behind-the-scenes glimpse of what goes on in this ministry and how many of these women became involved.

Two old-timers in the group, Carolyn Schafer and Lisa Wills, spoke of their longtime involvement.  As we talked, they determined that this ministry was started about 15 years ago and that former Associate Pastor Bill Carpenter helped get it started.  Carolyn reported that she learned to knit when she was young and then quit for a long time.  When JCUMC started the ministry, she decided to become involved a year later, seeing it as a great thing to do in her spare time after her retirement.  Lisa became involved shortly after that, serving as chair of the group for a while, and also taking charge of the scarves for our college freshmen.

Carolyn invited Shirley McKenny to the group about 3-4 years ago.  Several in the room chimed in to vote on Shirley as the faster knitter in the bunch.  They also confirmed that her “hidden talent” was using scraps of leftover yarn to make lovely shawls.  Shirley reported that she frequently knits at home while watching TV, stating that “I crochet, so I don’t eat.”  What a way to diet!  She added that she does this because she can knit while watching TV and doesn’t even have to think.

Karen White has been involved since about 2012.  After reading about the group in the bulletin, she decided to join since she already knew how to knit and crochet.  She said that it generally takes her about 30 hours to complete a prayer shawl and that she generally finishes two per month.

New church member Mary Kentos first became part of JCUMC through the Chancel Choir.  She attended that day’s Prayer Shawl meeting for the first time, commenting that although she hasn’t knitted for a while, she sees this ministry as a way to serve the church.

Jo Jo Shorter currently chairs the group.  She confessed that “when I was young, I said I would never do this.”  When she joined JCUMC a couple years ago, she didn’t know anyone in the church and decided to check out this ministry as a way to meet others – despite not having the foggiest idea of how to knit or crochet.  Others in the group taught her and now she is a pro at it – all the while organizing this group.

When asked for more details about this ministry and how it works, Jo Jo reported that of the approximately 30 knitters on the roster now (mostly women, but a few men), about 12 show up to knit at each of the monthly hour-long meetings on the second Wednesday of each month – either in the afternoon at 1pm or evening at 6:30 pm.  She was also excited to add that between the recent Ministry Fair and articles in the Bridge at the Creek, seven new members have joined the group.

What else did I learn about this ministry that day?

What about the process and expenses?

What a fun hour I had that day learning more about this impactful ministry.  I’m sorry I was not able to come back that evening to visit with the group meeting then.  I’m sure I would have heard even more stories.

As you consider joining this ministry, remember these words of advice from some current members:

If you would like to be part of the Prayer Shawl ministry – either joining the group or making a donation of money or yarn – or would like more information, please email Jo Jo Shorter (jo2shorter@icloud.com).