Are you familiar with UMCOR – the United Methodist Committee on Relief?  You may be if you’ve ever packed flood buckets – like we did last fall for Hurricane Harvey victims.  If not, UMCOR is the humanitarian relief and disaster response arm of the United Methodist Church.  UMCOR works with people in more than 80 countries around the world, including the US.  UMCOR not only provides temporary relief just after the disaster has occurred – they also offer long term support.

Anecdotally it’s said that UMCOR is often onsite before the Red Cross when a disaster occurs.  While there’s no evidence to support that, UMCOR is committed to remain in the community for the long haul.  Continuing to help rebuild and being the last to leave after a disaster is UMCOR’s goal.  Their disaster response is a three-stage process:  (1) an emergency stage; (2) a relief stage to help the community assess damage and stabilize homes if possible, while also caring for emotional and spiritual needs; and (3) the long-term recovery stage.

Currently, UMCOR is working through grants given to local conferences in Texas, Florida and Puerto Rico in response to last year’s hurricanes.  Additional assistance is ongoing in Syria (civil war), Sierre Leone (mudslides), Northern California (wildfires) and dozens of other places around the world.  Relief efforts in New York and New Jersey after Hurricane Sandy which hit that area in 2012 just concluded.  UMCOR works to provide aid in areas that don’t get much media attention.  While we all watched pictures of the flooding in Houston last summer, UMCOR went to the small communities in the Coastal Bend area to help. 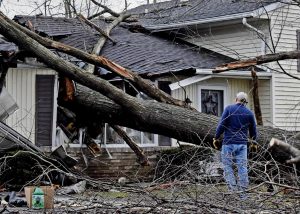 UMCOR has over 10,000 trained volunteers ready to be called into service.  Each conference has a disaster response coordinator who leads local efforts and works with Early Response Teams from around the country.  Each team typically has 6 – 10 people who have gone through the intense UMCOR training.

UMCOR is supported by every United Methodist Church in the world through apportionments paid to each conference.  Donations directed to specific disaster relief are also accepted.  Prayer and volunteers are always needed.  If you are interested in UMCOR, please contact connect@johnscreekumc.org.  More information is available on www.umcor.org as well.