In North Fulton County there were two small rural churches, each having about a dozen active members. Warsaw Methodist Church was established in the early 1800’s on property known as the Warsaw campground, which served as a planning site for soldiers during the Civil War. The Ocee Methodist Church was founded much later, around 1915. It was the joining of these two small groups in 1987 that Johns Creek United Methodist Church was born. Johns Creek was officially consecrated on September 7, 1987 at the site of the old Warsaw Church. In 1989, the church received the current property from Johns Creek Technology Park and began a new church building.

In the late 1980’s, the construction of the Sanctuary (now the chapel) was completed. In the 1993-1994 time period, a long-range planning committee was established to identify and plan for the church facility’s needs for the next 10-12 years. A four-phase construction program was developed. The phases were as follows:

A four-classroom education pod east of the original structure. This addition was completed in 1994.

A family life center – a multi-purpose structure that would have a sanctuary/gymnasium, classroom, and kitchen. This addition was completed in late 1997.

A Christian education building completed in the spring of 2004. This building includes Sunday school rooms, preschool, conference rooms, library/media center, and an indoor playground. The structure is three stories with classrooms and offices, a library, and an indoor playground on the ground floor. The second floor includes classrooms for adults. The third floor is dedicated to the youth with a classroom, warming kitchen, and a small auditorium. 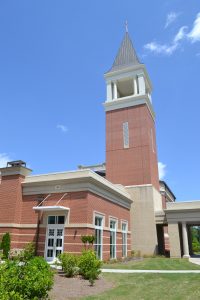 God has continued to provide for JCUMC and it is our prayer that this new facility be used to the Glory of God and aid in our mission to reach out to this community by application of Biblical principles, prayer, worship, and caring ministries. This church wishes to bond individuals to Christ by nurturing their spiritual lives and engaging them in discipleship. Come, Worship at Johns Creek United Methodist Church at 9:45 in the Family Life Center or 11:00 am and enjoy the beautiful Sanctuary!